I recently found a website which can acurately describe your personality based on your responses to an online test.

At the beggining I was skeptical, but now I feel like whoever runs the website understands me better than my own family and friends. The test must be brilliantly designed and whoever made it definilty put a lot of thought in it.

I was assigned the INTP-T personality type. I has been noted that people with similar ideas often have similar personalities, so, I’d like to know how you guys score. Take the test and share the results here if you like.

Your personality type is:
Architect (INTJ-a)

This personality test is a version of the Myers-Briggs Type Indicator: 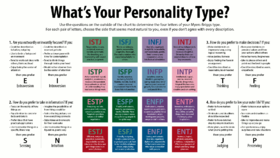 The Myers–Briggs Type Indicator (MBTI) is an introspective self-report questionnaire indicating differing psychological preferences in how people perceive the world and make decisions. The test attempts to assign four categories: introversion or extraversion, sensing or intuition, thinking or feeling, judging or perceiving. One letter from each category is taken to produce a four-letter test result, like "ISTJ" or "ENFP". Most of the research supporting the MBTI's validity has been produced by t...

It’s interesting that this specific version adds a fifth dimension that seems to correspond to the neuroticism dimenstion in the big five system:

In psychological trait theory, the Big Five personality traits, also known as the five-factor model (FFM) and the OCEAN model, is a suggested taxonomy, or grouping, for personality traits, developed from the 1980s onwards. When factor analysis (a statistical technique) is applied to personality survey data, it reveals semantic associations: some words used to describe aspects of personality are often applied to the same person. For example, someone described as conscientious is more likely to Th...

The Big Five model has a stronger scientific support, but the MBTI is still a very popular (among the general population, not so much among personality researchers) model. I’ve always turned out to be INTJ in those tests, but I’ve become less introverted recently.

i like to do such tests after a while again to see how my personality changes. though the results are a little funny weightened, they still seem to apply.

I already looked this up and made it available off-line in PDF form. Has certain advantage - I also see the data potentially used in wrong / un-consented ways through on-line route. But I’m not sure and that’s half of it perhaps…

‘The ENTP personality type is the ultimate devil’s advocate, thriving on the process of shredding arguments and beliefs and letting the ribbons drift in the wind for all to see.’

AKA Troll! hahaha. That’s too funny!

'ENTPs don’t do this because they are trying to achieve some deeper purpose or strategic goal, but for the simple reason that it’s fun. ’

No! being fun is just a bonus!

‘No one loves the process of mental sparring more than ENTPs, as it gives them a chance to exercise their effortlessly quick wit, broad accumulated knowledge base, and capacity for connecting disparate ideas to prove their points.’

‘An odd juxtaposition arises with ENTPs, as they are uncompromisingly honest, but will argue tirelessly for something they don’t actually believe in, stepping into another’s shoes to argue a truth from another perspective.’

heh. I take back everything I said about this type of test being meaningless.

My Results are not clear, but the classification of “Analyst” und “Diplomat” is rather sure.

Your personality type: “The Debater” (ENTP-T)

It is just me, or is the Assertive/Turbulent just a rebranding of the “neuroticism” trait of the Big Five traits in order to pigeonhole it into pseudo-scientific MBTI? 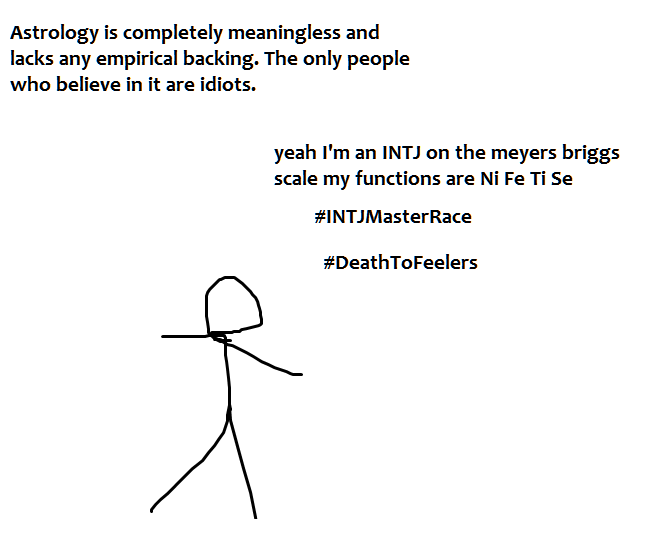 It is just me, or is the Assertive/Turbulent just a rebranding of the “neuroticism” trait of the Big Five traits in order to pigeonhole it into pseudo-scientific MBTI?

Yes, it is indeed an adaptation of neuroticism to MBTI, but I don’t see any problem with that. It’s just taking an idea from a theory to improve another theory.

For absolutely no reason at all, they probably aren’t, these personality types are drastic simplifications of human minds, but that doesn’t the test can’t be useful.

The reason I posted this link here is because I, as many others, found out that the test results described my personality with incredible accuracy, so I guess that it does have some empirical backing.

I believe that the theory must have flaws, maybe even serious flaws, but if it works for so many people, I don’t see any reason to make a fuss by comparing it to astrology.

Anyway, I’m not saying that modern psychology should be fully based on the Myers-Briggs indicator, but I think it has proved it’s utility for many people.

I’m not sure what you mean by that exactly. Do you think that personality trait distributions being bimodal contradict them following a normal distribution?

Sorry, I was skeptical of this test because it largely references MBTI while sourcing Neuroticism, and I think people should cite their references/inspiration when possible as to indicate that they are not simply re-branding existing concepts, even if it should seem obvious.

It’s just taking an idea from a theory to improve another theory.

It seems to me more like grafting newer data on an antiquated theory. All it does it add another dimension, a subpar compromise between an less popular data-driven model onto a popular psychoanalytic theory, without doing anything to deal with the baggage associated with it.

Do you think that personality trait distributions being bimodal contradict them following a normal distribution?

Perhaps there’s a psychological need to “polarize” the results of personality tests.

Yes, a normal distribution is quite simple: it has two moments: a mean (which is also the median), and a variance. Anything which classifies things into types has a dichotomy (which might or might not be necessarily bimodal, but it is polarizing: e.g. the median is not the mean).

MBTI retains popularity because it has a theory, it has a correspondence to the four humors/elements (as people don’t like being disconnected from the past), and by having Types instead of Traits, which yes, assumes dichotomies (as people like to be able to classify things). The Big Five traits don’t have these features that make it popular. I hope that people can do better by offering the means by which to build on these models rather than data that exists disconnected to any explanatory aspect. Perhaps a model of a system in which agents develop an ensemble of preferences rather than a uniform optimal strategy would be better in that it would open doors for additional research?

I believe that the theory must have flaws, maybe even serious flaws, but if it works for so many people, I don’t see any reason to make a fuss by comparing it to astrology.

i thought about astrology, as well, while reading about my personality -type. i think the comparison fits well. it is written in a positive manner, so that even the “flaws” of your personality seem to be funny and in a way nice. so there is a “pro”- attitude the whole time and people tend to agree with everything that is presented nicely: to be not so critical with wrong and incorrect aspects and to be overhappy with aspects that seem to fit …it is the same with astrology. our mind does a great job to believe, what we want to believe.
but nevertheless astrology and psycho tests are fun. and you can use them to find something out about yourself, when you ask the right questions. for example: what aspects do you WANT to be reflected?

i thought about astrology, as well, while reading about my personality -type. i think the comparison fits well.

Except that this test actually tries to evaluate how you think and behave in your everyday life while astrology simply assigns you personality traits according to your date of birth.

The Myers-Briggs Type indicator may have its flaws, but at least it doesn’t scorn reason like astrology does.

Aditionally, I think that these test have proven their validity through its success in bussinesses. You don’t see many successful companies applying astrology to optimize their performances, do you?

Yes, a normal distribution is quite simple: it has two moments: a mean (which is also the median), and a variance. Anything which classifies things into types has a dichotomy (which might or might not be necessarily bimodal, but it is polarizing: e.g. the median is not the mean).

This tests assigns you a percentage associated with each trait. No one is 100% introverted or 100% extroverted and the people who made the test know that.

The only reason why they use a bimodal system is to assign people personality types that can be explored with signifficant detail.

I belive that trained psychologists could draw more precise conclusions from other types of approaches, but, for common people, it’s just easier to read about a personality type in which they fit, even if they don’t fit completely.

The Myers-Briggs Type indicator may have its flaws, but at least it doesn’t scorn reason like astrology does.

the problem is, that i repeated the test, completely convinced, that i will have the same intp-t but then i was a debater: 52% extraverted, 83 % intuitive, 53 % thinking, 77% prospecting and 60% turbulent. maybe the percentages are not so different than before? or am i deluding myself because i want the test to be true?
you are right, that the stars may have something to do with ones personality seems to be unreasonable. but that does not mean that it is reasonable enough to reduce a personality to only 5 aspects. another point that is illogical is, that thinking and feeling should be contradictions, because they are not! and intuition is a result of observation and prospecting leads to interpretation and judging. maybe today i am more extraverted, tomorrow i will be introverted again…