I’ve been playing around with JavaScript and its basic drawing capabilities. So, I thought I could use them to create something that is similar to the Fractal Future logo we currently have – yes, it’s a fractal (or rather: an overlap of two fractals), but only with the second iteration displayed!

Here’s how a variation of the logo with a scale parameter of 0.45 instead of phi - 1 looks with wild psychedelic colours: 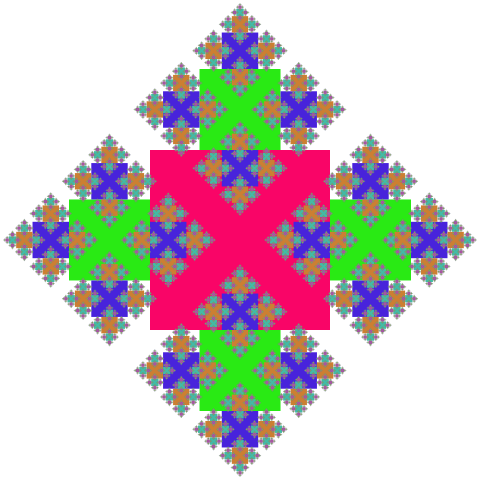 Obviously, each square spawns four adjacent baby squares. This is not what I intended, but it was way easier to program it that way, and it’s interesting, too. I want to create a version in which after the second iteration each square only spawns 3 baby squares – in the directions that are not blocked by its parent square.

If you want the code that spawned this abomination, you can have it, if you ask for it!

Have you created your own crazy fractals? If so, please share them with us!

You can also share interesting fractals you’ve found anywhere else.

Ok, I’ve managed to program a version that only spawns 3 baby squares from iteration step 2 onwards.

With the central square removed the result has some similarity to the current minimalist version of the F3 logo (using a scaling parameter of 0.49): 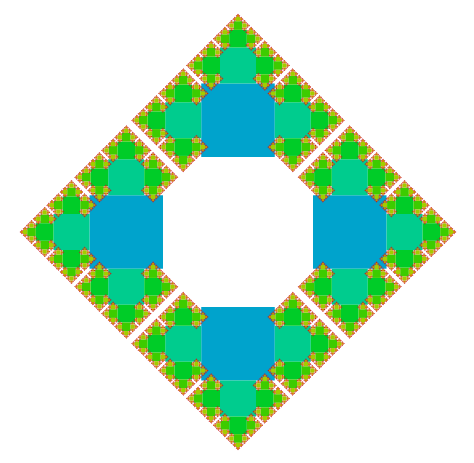 It’s interesting that the outline of the figure is always diamond shaped. Now I need to find out a colour configuration that looks good. And then somehow combine these two figures into one in a way that makes it look nice. Then we will have an actually fractal logo. Well, kinda. People still won’t be able to zoom. To create a zoomable version would be an exercise for the real experts!

Using a scaling factor of phi - 1, which is (1 + sqrt(5)) / 2 - 1, we get a result that kinda reminds me of Persian carpets. it’s not what I have expected it too look like. Even though each square only spawns 3 baby squares the smaller ones write themselves over the bigger ones after a 180° turn. The order in which squares are drawn creates more or less subtle asymmetries. This makes it a bit on an atypical fractal. 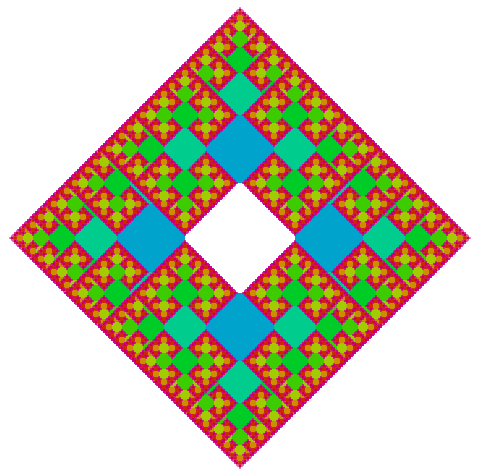 I call my next fractal the Ring of Friendship. At a scale factor of 0.294 the different substructures just seem to touch. This is an overlap of two fractals of the kind above, with one rotated by 45°. 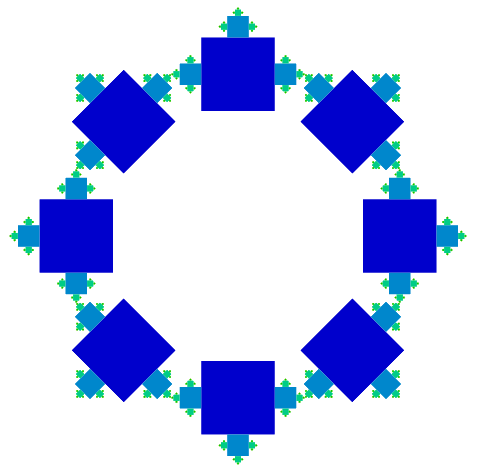 With higher scale factors one structure is painted over the other, which is not the effect I want to have. To avoid that, I’d probably have to use some clever image editing program like Gimp in order to create a satisfying overlay of two fractal structures.

It’s finally done. I’ve made an alternative fractal version of the F3 Logo. But the scaling factor is 0.4 in this one, so there should be some apparent differences. Nevertheless, it looks fascinating, especially with the filters I’ve added: 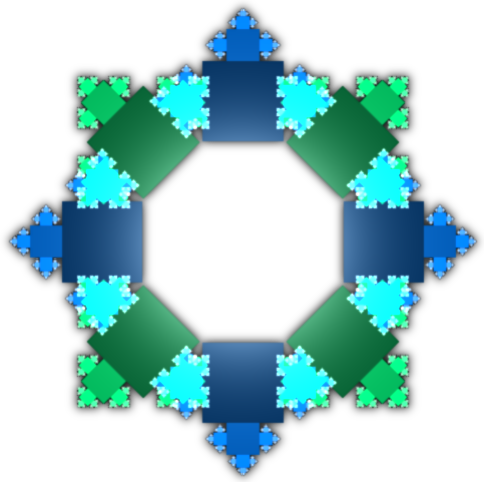 What do you think? Does it look presentable?

I’ve found a site that can generate some interesting shapes in a fractal manner: Nico’s Fractal Machine.

Here’s an example of what it can do. It’s interesting that it looks kinda similar to my fractal above. 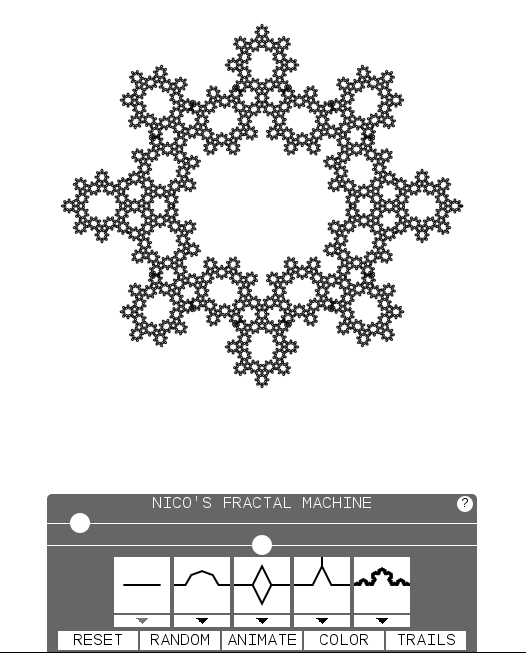 The fractals from the gallery of the page http://www.fractalsciencekit.com/ look absolutely magnificent! For example just look at this one: 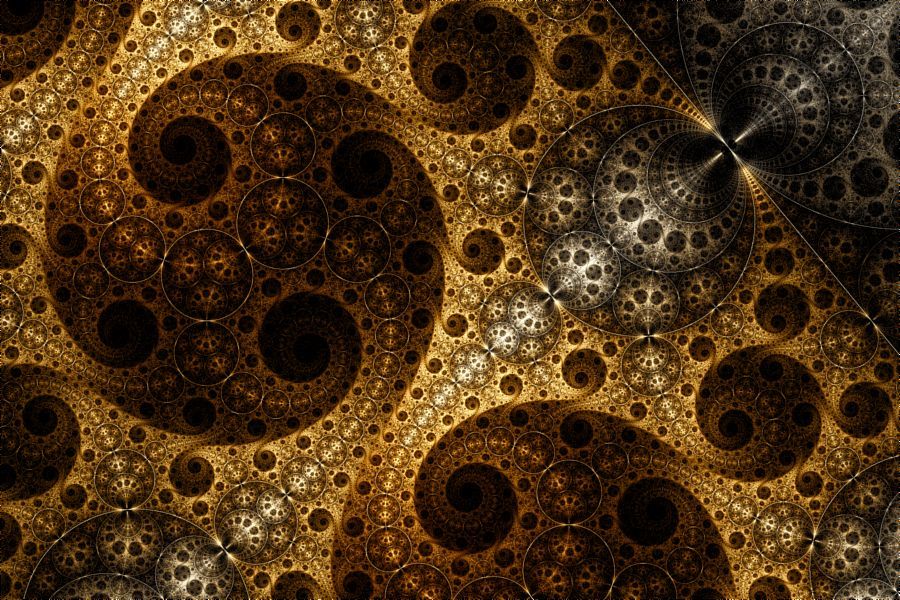 I’ve started including rotation into my square fractals. This one looks kinda weird as a result with an angle of 99°: 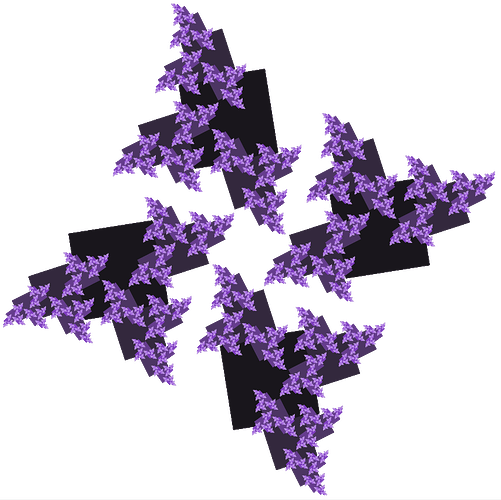 I call it “Purple razors whirlwind”. It doesn’t look like it wants to be touched

I found out a trick to make the overlaps in the Fractal Future logo look right, and not overly bright. The trick was to copy the layers 8 times with a transparency of 50% and stack them one over another 8 times. The result just looks really flashy (especially since I’ve probably overdone the light effect, but that just serves to suggest an unexpectedly bright future): 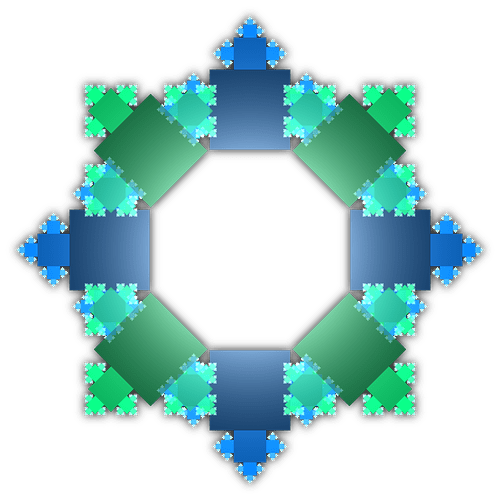 I’ve finally finished making a usable (vanilla) Java Script based web application that can create those fractals that I’ve posted here (apart from the shadow and glow effects that were added later on): It can be found at

It’s obviously an early version, but the main features are working. It’s quite fun playing around with it, if you give it a try. Here’s a fractal that I’ve just created to demonstrate what the app can do relatively easily: 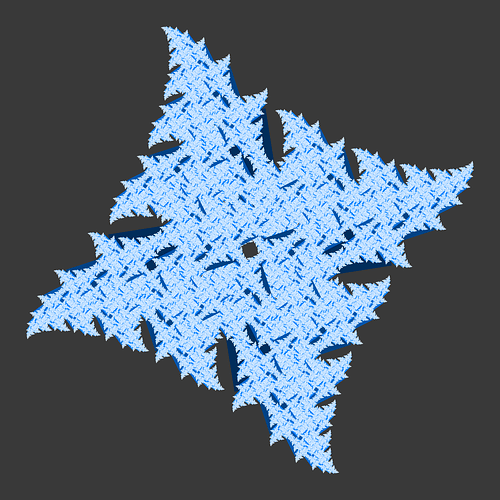 In this image there are 11 iteration steps. This already takes a few seconds to generate. If you go higher, the app will probably crash, because it takes too long to paint the image. Please note that I’ve done this primarily as JavaScript programming exercise, so the app and code could of course be much better.

I already have some ideas for features to add to make it possible to make more exciting fractal images. Those could then be used for promotional purposes, for example. Nevertheless, you can actually already download the images you’ve created with the Fractal Generator app, by right clicking on the canvas and then saving the images as .png file. Note that it automatically has transparency in non-pained regions when you uncheck the “Background visible” checkbox.

If you have suggestions for the app, or have made interesting fractal images, then please feel free to post to this thread.

Painting smaller versions of a fractal into a larger fractal yields interesting and aesthetically pleasing results!

Say hello to my “Ice Flower”: 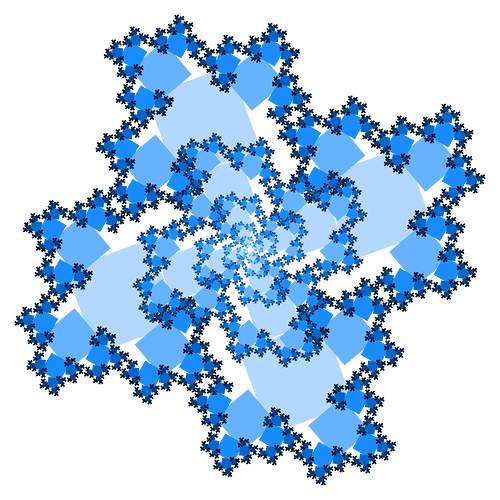 The site http://www.fractal.org/Bewustzijns-Besturings-Model/Fractals-Useful-Beauty.htm explains that the type of fractals I have created with my generator is called “Iterated Function Systems” (IFS) fractals. Interestingly, IFS fractals starting with squares and growing outwards aren’t really popular, even though they are relatively simple. 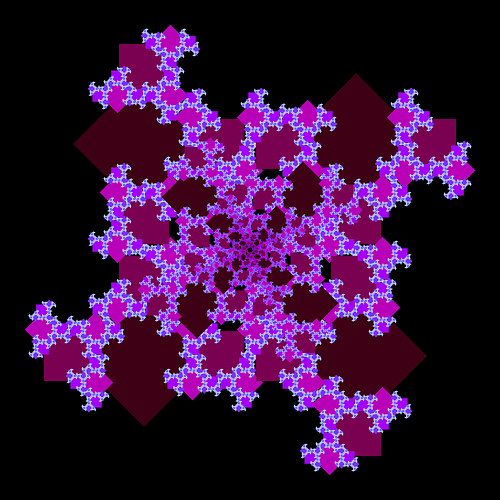 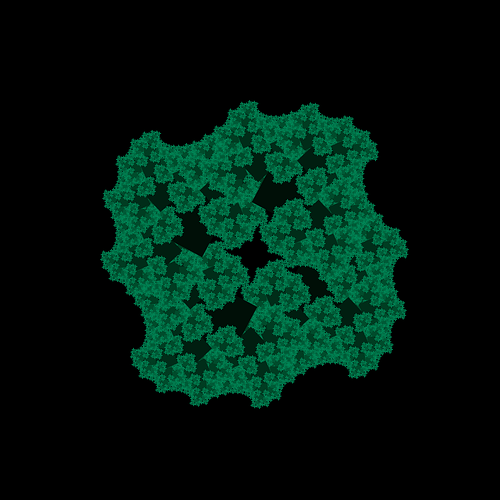 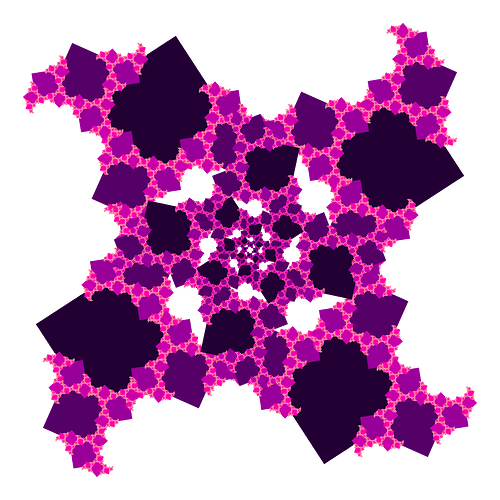 sorry for the pink overload. Now for a more natural look: 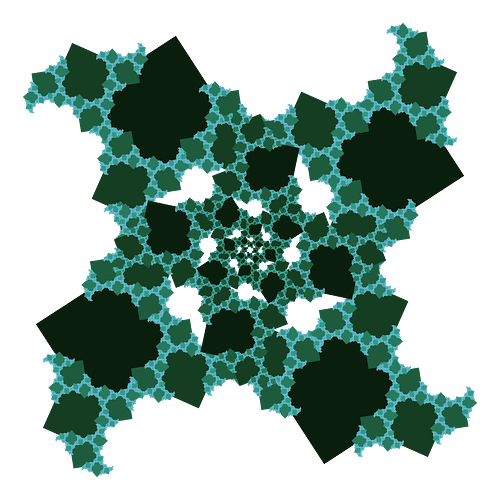 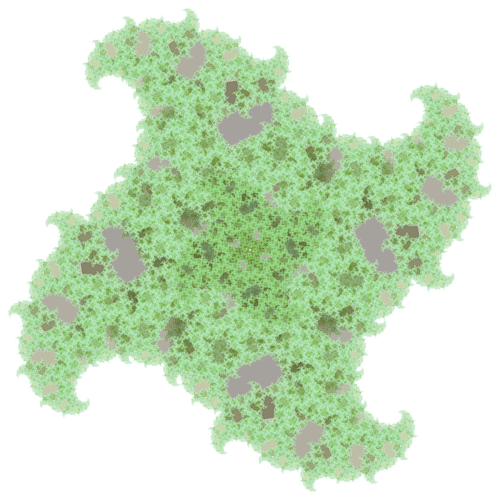 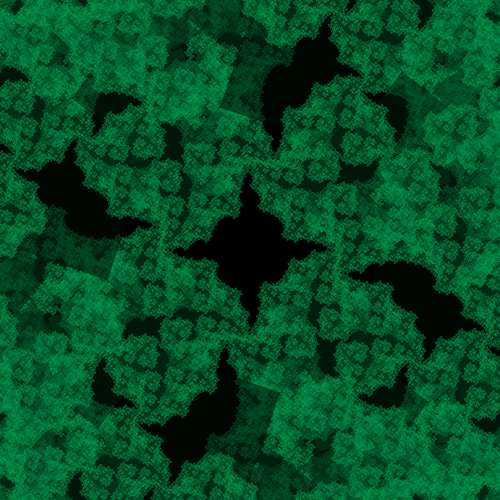 I will use the following as my personal avatar in the future, at least experimentally: 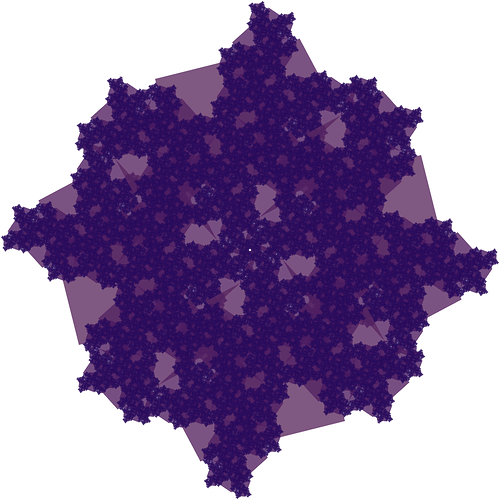 ‘Ring of Friendship’ is amazing - for me it looks (or I imagine) there are sparkles around the head and hands! Also the others look great… Definitely could be a best of page in the making…

The above is great for playing with… (p.s the link above lost it’s formatting when I quoted Nico’s Fractal Machine

Somehow I overlooked that post… It’s a really cool generator

After all these years I’ve continued my work on my fractal generator.

In the meantime I’ve added the features of choosing the symmetry and selecting between squares, circles, and triangles as base shape. 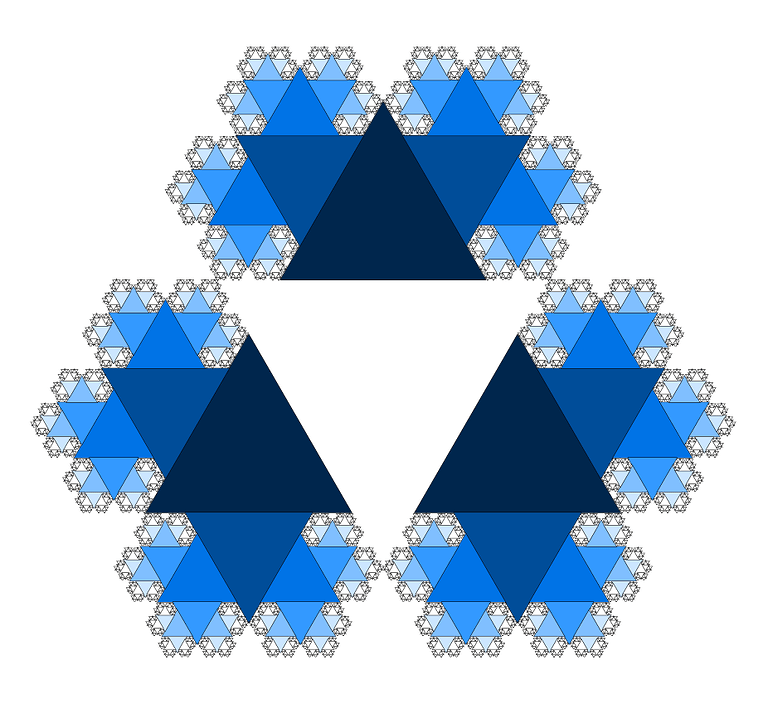