Today I’ve registered the domain fractalfuture.net, so that part of the plan is already done.

I hope you like it. The fractal F stands for “Fractal Future” and the fractal squares stand for the network that is itself composed of various networks of different colours. I think the logo looks cool enough for the beginning

So, what are the next steps?

All of this may seem a bit rushed, but I thought it would be good to do this change sooner rather than later. My next plan is to launch the REPDEV (Reputation Economy Promotion, Development, Exploration, and Vitalization) Network which will first use the infrastructure of the Fractal Future Network. At that point the Fractal Future Network will have three major projects:

More projects can come later, too, of course. But I first wanted a stable name and a domain that can be remembered easily: FractalFuture.Net

Thanks for your support and understanding.

Here’s another version of the Logo where the fractal F is larger. That may be necessary for smaller versions of the logo:

without aura (bad on white background)

with aura (for white backgrounds):

It seems like I need to work and remake the fractal F so that it looks better on small versions. What do you think?

Edit: Here’s a minimalist version without the F and with removed centre. So, it’s a “decentralized” version of the logo:

The database migration seemed to work. I still need to adjust some settings and change the logos. Please stay tuned. And please report any errors if you find any!

It seems like the new forum is basically working now. There’s still one important thing to do: Create a full logo for the forum with the name “Fractal Future Forum” in it. I’ve googled “fractal” fonts, but they don’t look very appealing to me. Something more “freestyle” could be nice. Or just taking an awesome font and adding special effects or something. If you have a good idea, please be creative

I’ve set up forum.sfmeta.net to point to the new forum. So, this forum currently can be accessed via

I’m not sure whether any problems will arise from using the second URL. To be sure things work out right, you should use forum.fractalfuture.net.

I’ve made a top logo for the Fractal Future Forum using the “Neuropolitical” font. I’ve used an emboss and a “cubism” filter to make the text look kinda “fractalized”:

It may feel like a bit “too much” or too “wild” or even unsettling, but I think it does look kinda interesting and intriguing. Also futuristic.

Please feel free to comment on it (whether here or on the blog).

Based on the “actually fractal” design of the logo in the Psychedelic Fractals thread, I’ve created a new version of the F3 logo:

And here’s the small version of it:

And of course the favicon:

Finally, here’s the open graph version that should be displayed on Facebook: 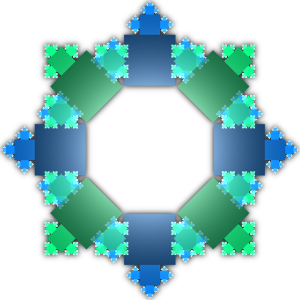