Initial feedback to the idea has been quite positive so far, so I think it’s the right to go ahead with the idea and move on to the next steps:

Apart from the name we need to give the thing a recognizable theme and design:

I choose yellow because it is a color of organization, intellect, and the mind.

Blue for the more peaceful connectivity approach, or red for authority.

You propose “Concord” as name for the project? Interesting, but perhaps that is promising too much. After all, the platform will also allow some heated discussions between people with quite different political perspectives. Resolving these conflicts is not something that such a discussion platform should or could promise.

To make it clear: I want a platform that is associated with futurism and not with transhumanism. That may be a difficult task, but I think it’s important to emphasize neutrality. Project Future will be a neutral one for futurists (= future aware innovative activists). That’s why I’m against any “H+” logos. The logo I want should be neutral, but futuristic and inspiring. Like the Star Trek: The Next Generation Communicator shape logo.

When it comes to colours, I’d like to choose one primary colour and determine additional colours as complement or triad (symbolizing wide range and inclusiveness). I’ve stumbled upon this very cool colour harmony tool just now: Paletton.

If red stands for authority, then it would be natural to take the complement (cyan) to mean anti-authority, which would fit nicely to the idea of a neutral platform. This would suggest something like the colour triad (with 60° angle) around #29516D (try it in Paletton). What do you think about it?

Shades of blue, from near white to deeper shades give a range of contrast that will also look well in b&w reproductions.

Which is why I don’t want a monochromatic theme, because I don’t want to convey unity, but diversity! All serious players are welcome! 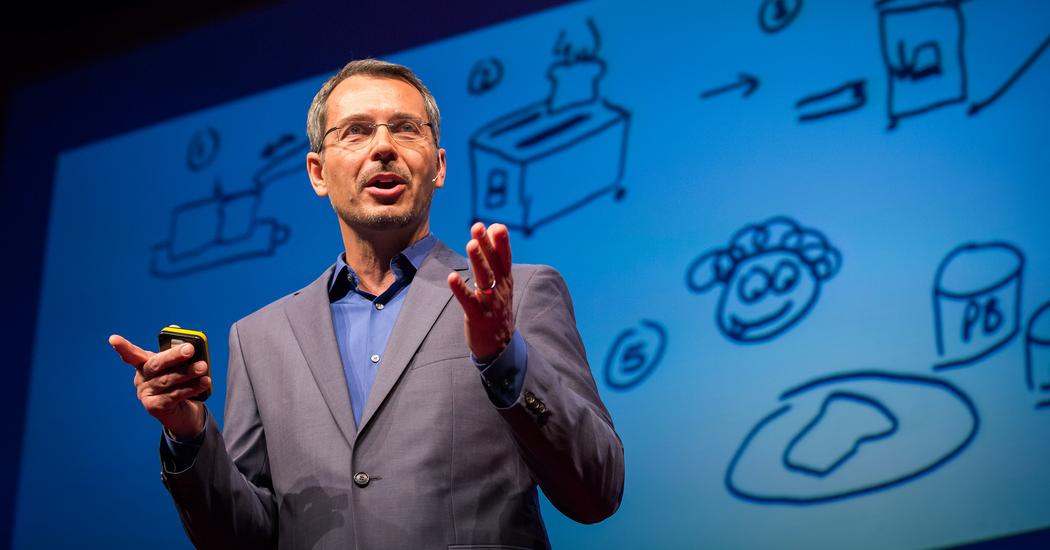 Got a wicked problem? First, tell me how you make toast

Making toast doesn’t sound very complicated -- until someone asks you to draw the process, step by step. Tom Wujec loves asking people and teams to draw how they make toast, because the process reveals unexpected truths about how we can solve our...

It really made me think that we would probably profit greatly from graphical card based collaboration tools (need to search for that). But secondly, it triggered another idea for the project name: “Future Synthesis”.

Edit 2: The name “Future Synthesis” is already taken. So, I’ll come up with another proposal: Future Round Table. What do you think about it?

Edit 3 (2015-02-16): Yesterday I had a brainstorming session and there we came up with a few interesting ideas. One part of the name is always Future / Futures / Futurist. The other parts were:

However, I have found a name that may fit better to the idea of this platform: Future Boostrap(ping). It would be a platform to help different futurist projects to bootstrap themselves into maturity. For the meaning of “boostrapping” see: In general, bootstrapping usually refers to a self-starting process that is supposed to proceed without external input. In computer technology the term (usually shortened to booting) usually refers to the process of loading the basic software into the memory of a computer after power-on or general reset, especially the operating system which will then take care of loading other software as needed. Tall boots may have a tab, loop or handle at the top known as a bootstrap, allowing one to use fin...

I’ve also found that there is also a framework called Bootstrap (which seems to be called the future of UI design with a positive outlook). What relevance does that have for our branding decision?

the platform will also allow some heated discussions between people with quite different political perspectives.

I don’t want to convey unity, but diversity!

Given how you talk about it: a Particle Collider/Atom Smasher/Particle Accelerator for thoughts about the future comes to mind. We smash together our visions of the future to see what we get.

‘Thought Smasher’ sounds like a new kind of party drug and ‘Dream Smasher’ makes us seem like we take toys of children then destroy them before their eyes. So lets not use the term ‘smasher’.

So something like: The Future Collider Organisation. Or the Future Vision Accelerator.

I like this, the concept and idea of “The Concord” goes beyond almost anything that currently separates mankind. The word itself remains untouched (yet).

I even have “protocols” to achieve a wider concord. The draft is in spanish but I’ve been speaking of it around this forum. Even if its not for the Project Future, I would save this idea.

How should we really call the platform?

The intention seems to impulse futurist trends, but why not giving some story behind the name? Like “Prometheus”, which attempted to bring progress to mankind, or “Babel”, which represents confluence of tongues. A bit less religious metaphors exists too.

What colours will we use for the platform? And why?

Blue with white seems widely understood as pacific. That, with a touch of black, gives seriousness and a peaceful, progressive face.

What kind of logos do we use?

I like the pigeon, its white and very uniform. Easily distinguishable. But other birds, or even mythological animals could do what you want.

Personally, in the idea of concord I use a platonic solid like the polyhedron, mixed with a flower named “don’t forget me” in my country.

For your project, a more technological figure would be that of screws and springs.

What should be the core words

Vision, future, progress, hope. That seems the line.
Again, I would go for the motto “the future of mankind” if it means that goal.

we would probably profit greatly from graphical card based collaboration tools

Infinitely flexible. Incredibly easy to use. Great mobile apps. It's free. Trello keeps track of everything, from the big picture to the minute details.


Also, simply by playing with the contents of folders full of pictures, articles, etc. Reorder them, and you get constant feedback. I also use gjots to take notes and rearrange them.
Radivis (Michael Hrenka) February 19, 2015, 6:11pm #9

I quite like your suggestions, @John_Hocter. They are rather inspiring.

However, there is a good reason against using the word “Collider”: It sounds too confrontational and chaotic. It would be a good name for a talk club to come up with the craziest ideas. But you won’t get beyond the “idea” stage. There are many good ideas out there and we need to help people to turn those ideas into reality.

Hence, the world “Accelerator” is a much better fit. In the business world the term “incubator” is used for companies that help other companies out in the starting phase. Both “Future Accelerator” and “Future Incubator” would be descriptive names for the kind of platform I want to create.

There’s still a problem with “Accelerator” though: Acceleration is good, but too much speed can cause problems and chaos. It’s better to reach the right goal in one peace, rather than perhaps reaching it faster, but getting into real trouble otherwise. We don’t need to get to the future faster: We need to get to the right future at all – ideally fast, but that’s secondary!

This is why I still prefer my own idea “Future Bootstrap”. It implied that getting to the future is a difficult process that involves many iterative steps. It suggests applying the method of bootstrapping to the creation of a better future.

I’m still not convinced that it’s the best name, but it does have potential. Perhaps we can find something better, still.

Oh, and btw, what do you think about the current azure / spring green colour scheme of this forum?

TRELLO
https://trello.com/
Also, simply by playing with the contents of folders full of pictures, articles, etc. Reorder them, and you get constant feedback. I also use gjots to take notes and rearrange them.

Are you suggesting we should try out Trello for brainstorming the branding of this platform? Do you think it would be worth to test it out for this purpose?

Also, your logos look nice. They are an interesting starting point.

Oh, and btw, what do you think about the current azure / spring green colour scheme of this forum?

Are you suggesting we should try out Trello for brainstorming the branding of this platform? Do you think it would be worth to test it out for this purpose?

Trello is best for kanban style of work, to organize large projects and work on them. If you can split each part of the branding process, yes. But better do it for large projects, Trello can get cumbersome and is better for constant work. Even so, you could try it separately as an experiment, is worth to see what it can do.

Also, your logos look nice. They are an interesting starting point.

Poll the different name ideas, colors, and shapes separately and let the people decide. What better way to appeal to people?

Ok, we can vote on the name, colours, and shapes separately, and in exactly that order. But I’m not convinced that simple polls within a small groups of people are the best way to optimize the appeal of the platform for a wider audience. Nevertheless, seeing the different opinions expressed in a poll might be helpful.

But first we will have to define the set of reasonable name candidates. So, I ask you all to add the candidates for the platform names below this post. I will of course begin with my own serious candidate names:

That’s about all I can think of at present.

I only want to allow name suggestion that aren’t already taken. So, there should be at least a .com, .net, or .org domain free for a name proposal that you make.

“Future Concord”,“Futurist Concord”, or “The Concord” would be viable options. “Concord” alone isn’t. So, which of those do you want to add to the poll, @DLHeintz?