Party- and Work-Programme of the Transhuman Party Germany

This is my translation of the programme of the Transhuman Party Germany. It may be unpolished and may contain some minor mistakes. I’m releasing it here, because it should be of public interest for the international transhumanist community. My personal notes are added [in brackets]. If some passages sound weird, the most likely reason for that is that the original German passages sound weird. In the original version the bullet points are actually pluses ("+")! 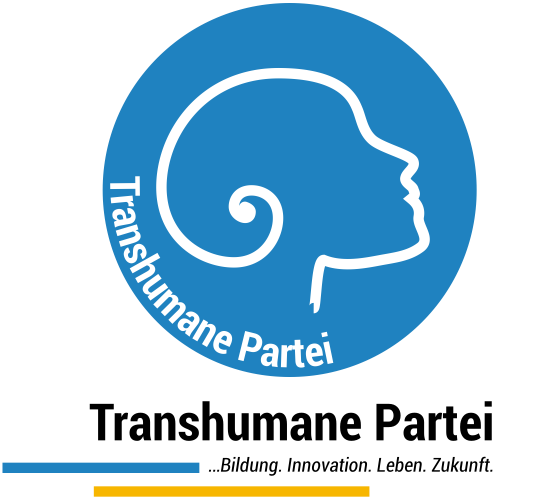 Party- and Work-Programme of the Transhuman Party Germany

We want to lead the dialogue about the current challenges, which are generated by technology. Rationally, transparently, and guided by our basic values. Guided by many modern humanist ideals (such as rational reasoning or comprehensive education), as well as the acceptance and respectful appreciation of all life – be it human or non-human – transhumanism regards scientific, technological, but also social progress, as well as a happy, self-determined, and fulfilled life in health, prosperity and freedom, furthermore in harmony with nature, as desirable without any special exceptions or restrictions, and without arbitrarily drawn boundaries or ideological constraints. As technoprogressive party the engagement with future developments, especially when their consequences start becoming visible, is one of the cornerstones of our political work. Innovation and progress entail far-reaching changes within ever decreasing frames of time. Therefore, we assess the alignment and necessity of political decisions though a future based analysis directed backwards in time: What do you need to do today in order to be prepared for tomorrow?
In order to enable such an approach in the first place, overcoming boundaries within our thinking is of elementary importance. In addition to the global society of tomorrow living with less and less boundaries, this process requires surpassing still present limitations in science, technology, economy, social issues, education, and democratic participation in a modern society.
Finally, at the end of all these processes, will also stand a human who will have developed beyond the present self inside and outside, mentally and physically, biologically and technologically.
Our political approach is scientific, open to all results, undogmatic, and transparent. Neither do we know the answers to all questions, nor do we claim to have optimal approaches for solutions – in contrast to other political factions.
Our aspiration is to develop solution concepts for current and future problems, to make use of chances, and to improve the lives of everyone from the perspective of each individual by using the principle of open, respectively public, science, and by working together with experts, while also identifying ourselves with a democratic society at large.

Since the invention of the first tools, humanity has strived to simplify, accelerate, or even automate hard, difficult, or seemingly impossible work though the application of technological devices. This development has not ceased, but has accelerated massively with the spread of digital technologies. In increasingly many areas networked automation will take over work from humans. Therefore, humans will have to work less and less in the future. It is of utmost importance for us as society to prepare for this development, and to provide provisions for preserving social justice and participation. At the same time, we also require supporting and balancing mechanisms for a functional scientific, economic, and societal development. In practice we demand:

The basis of a modern, just, and sustainable society is an educational system that has the ideal support and empowerment of each citizen as goal, and which creates opportunities to explore and develop individual interests. Considering the dynamic environment and technological change within the working world, we work on guidelines and a meaningful liberalisation of the education sector towards individual liberty, digitalization, and modernization of educational jobs. In this regard, we want to position education and development as hallmarks of a mature society. That's why we advocate in particular:

The real and digital interconnectedness of working worlds, societies, and histories creates new chances and challenges for political long-term planning. Especially the dynamic and border-crossing ramifications of decisions increase the role of social responsibility for democratic and ethical values. By expanding the cooperation with organisations and institutions within Germany and other countries, we want to consider present and expected future developments, as well as the long-term consequences of political decisions, for planning the future, in order to be able to make socially responsible decisions. That's why we demand:

The world has changed ever since. Change is a basic component of our lives; the question is simply: How can we use it to our advantage? We can expect that the future will bring many possibilities, but also great challenges. The human environment is also changing increasingly faster and in more profound ways. Present and expected future technological progress as well as its long-term effects therefore should be researched systematically. We, as humanity, can be confident that we will be able to solve the great problems of the 21st century mainly with the help of new technologies – millions of researchers and inventors are working on that already. We, as Transhuman Party, want to support them in that endeavour and encourage forward-looking innovations. In the sense of a "commitment to progress" we furthermore advocate stretching the boundaries of human possibilities through the use of innovative technological approaches and new scientific insights, while giving possible risks and ethical concerns due respect. In the future, this is supposed to enable every human to increase his quality of life individually, if desired, and to determine his physical and mental capabilities on his own, and to surpass contemporary fundamental human constraints. Considering this goal, we deem scientific, technological, as well as societal progress as both necessary and desirable. In practice, we advocate:

Human life expectancy has risen and is expected to rise further; but we also have an increasing number of health improving and life prolonging factors at our disposal. In particular, prevention is one of those factors, which should play an increasing role in our healthcare system in the future. This will then help to reduce the costs of healthcare drastically, while it will grant everyone a greatly longer life and a higher quality of life. Where biology can't keep the body healthy on its own, technology can facilitate the sustainment of life and vitality. Furthermore, we see the personal freedom to choose, in particular about one's own death, as a basic right, and it requires a transparent and comprehensible legal basis. For the future we demand:

Personal and societal security is threatened whenever insufficient transparency and opaque actions of organizations – or individuals – create spaces for abuse, violence, or terror. The measures then taken too late aren't addressing the initial situation appropriately, and quite often cause permanent damage and difficult to estimate counter-reactions. On the other hand, fear from repression and the pressure to conform limit humans and society in their free and autonomous development. Therefore we engage for:

The individual that is mentally and physically free is the basis of democracy and prosperity. This guarantee of freedom is the crucial creator of the space for the self, for happiness and well-being, as well as societal and individual health. This freedom may only end where the freedom and self-determination of other life is restricted substantially. The pre-existing basic rights not only must be maintained and reliably put into practice, but they also have to be repeatedly evaluated and expanded according to the development of new technologies and our progressing insights and knowledge. In the same manner, laws that restrict certain freedoms and basic rights, must be re-evaluated regularly and adjusted where necessary. For this purpose, we deem the following to be of particular importance:

We support a long-term energy and environmental policy that is based on rational considerations. Important changes of the infrastructure, like the energy revolution, must be well-thought-out and coordinated internationally, while at the same time remaining comprehensible for all participants. Apart from a discussion of short-term measures, it is indispensable for a peaceful and vital world community to push for the research and preparation of ecologically friendly and regenerative technologies with the highest priority. We demand in detail:

The economy is foundational basis for our wealth, but also a force that exerts a systematic influence on humans and organisations. Digitalisation, automation, and innovation increase the efficiency of the economy; but that by itself isn't sufficient for letting everyone benefit from this increased wealth. In conjunction with our other political demands, a more progressive economy will become a force that liberates humans from undesired work, creates new possibilities, and increases our quality of life noticeably. We strive for a more humane economy that allows everyone to develop their full potential as far as possible. We want to dismantle restrictive structures which limit personal freedom in inappropriate and unnecessary ways as far as possible. In detail, we want to achieve the following:

Without science, research, and development there wouldn't be any modern technology and innovation. As basis and engine of technological and societal progress, science plays an elementary role for the future of our civilisation. The scientific method is perhaps the most seminal development of the last millennium. It allows us to gain new insights in a most reliable and objective way. We stand for the systematic use of the scientific methods in as many different areas as possible. The purpose lies not only in optimising science in itself, but also to use it as far as possible and consistently to the advantage humans and other entities. By solving problems rationally and with the intelligent use of knowledge and technology, such a "more scientific science" can enable humans to become even more human. For this purpose we strive for:

Fascinating stuff and much food for thought. Thanks for posting!