Continuing the discussion from What’s the ideal discussion platform?:

I have this idea called Jera, that had basically the same goals as this forum and Project Future, as far as I understand. I just uploaded the specifications we had worked out to GitHub (we haven’t really done much coding at all, as I am quite busy with my studies at the moment). Ignore the “Community v1” as it’s an old version. Also, I would check the “Data structure” section first to get an idea of what it is about:

The overarching idea, reached after a lot of discussions and brain storming, is that the objective of the platform is to facilitate the purposeful creative process; and that this is divided in three main aspects:

These correspond to the main data types, and each of them can be further sub-organized into categories, via tags (like transportation, health, IT, etc.), although these don’t give the main structure (they are actually ancillary) to the system, but connections. So the proper way to implement a typical structure is to have a big goal called “Improving transportation” with a lot of children goals (more details about the type of connections in the document).

The important thing, as you point out, is that people should find what they are looking for as readily as possible. However, most people don’t know what to look for other than “improve the world”, so having a way to explore ideas is useful. That is why we put a lot of emphasis on connections between ideas (which was inspired by some other guys working on something called “Rhizi” as well as a set of idea tools like this one: http://hackathonideas.tk/).

People exploring the “goals section”, whether in “list view” or “graph view”, would be able to find the goals people are more interested in, as well as related goals. They will then find projects that people are proposing/working on to solve that goal, and also find the requisites that that project is looking for. Maybe they will even offer themselves for help if they have that requisite (could be a skill).

Some other user could be exploring the “requisites section” directly, to look for things to help in, if they had a certain skill/resource they wanted to offer/use. They could even filter the requisites for requisites used for projects that are aimed to solving a certain goal, or goals.

Basically, what we tried to design is the best way in which people with the intention of improving the world could find what they wanted to, no matter from which angle they came.

For each of the “goals”, “projects”, “requisites”, there is a corresponding page that holds information about it, as well as a “newsfeed” (a name that maybe isn’t that good, as it reminds me of Facebook’s) that basically has the “blog” and “discussion” features you talk about for the creative process (I actually put this “blog” and “discussion” features separately but a friend said maybe it’s best together, although I am not convinced).

So that people that want to discuss about a certain goal, will go to that goal’s page (which will load the “newsfeed”/thread page) by default, and they will post a new thread, like in a forum, or they will search for threads (sorted by date or vote-ranking), and discuss in it etc.

There are some more details, but that covers the most important stuff.

I have just opened up the idea as open-source so that anyone can help. So if anyone has any idea for improving it, or even wants to give a try at start to coding it, it would be great!

I already commented on your idea in another thread (“What’s the ideal discussion platform?”), so let me ask some general questions about your project here:

Anyway, feel free to use the resources available on this place (The Social Future Metanet), including this forum, the DokuWiki and the blog (see top navigation bar) (well, I’ve neglected the blog quite a bit so far, need to change that).

Interesting, I also have a project (Quantified Prestige) that I initially wanted to do with Django. It was a bit too complicated for me as inexperienced programmer, and my health wasn’t really good at that time, so I gave up on it. I want to continue creating a simple demo version with plain PHP, without any framework, simply because that should go much faster for producing a demo site. I’m not saying that you should do the same. Django is a really good framework, but of course it take a lot of time to get into any framework before you can produce something interesting with it.

How did you arrive at the project names “Jera”, respectively “stokosm”? They sound interesting.

The thing is that I am new to both PHP and Django, so I don’t have any preference right now, and Django looks easier, as I find Python easier than C-based stuff, generally.

I arrived at Jera after a lot of brainstorming with friends. Jera is a rune (a kind of old Norse symbol), for which we liked the symbol and meaning: http://www.sunnyway.com/runes/meanings.html

Stokosom comes from the greek στόχος/stokos (aim) and κόσμος/kosmos (order, in the sense of the orderly structure of something), meaning the “cosmos of aims”.

As for the non-commercial license, because I still have some hope maybe I can commercialize it myself, but really if someone asks me to use it commercially I’d probably say yes anyways…

Getting into a framework is much harder than learning a new programming language. It’s quite possible to create acceptable web apps in PHP without a framework within a reasonable time frame, so that’s why I want to start with plain PHP first. Also, PHP is quite wide spread which is an important factor. If you want to create something that becomes popular and spreads widely, use PHP. If you want something super professional that only runs on your own servers, best take Django.

I like your name brainstorming results. Jera does not only have cool meanings, it also sounds cool. “Stokosm” on the other hand may trigger associations with Russian cosmonauts (though they are cool, too, actually).

Why not combine both names to something like Jera-Cosmos?

Problem with frameworks is not only that they take long to learn, it’s also that they are either not robust enough, miss the one piece of functionality you happen to need (and then you find that writing plugins is harder than writing something from scratch), or they are big enough to be rich in features making them slow and complex to the point of exhibiting surprising and unwated behaviour. But don’t mind me, I’m biased

Also, I’m guilty of starting a framework (project) of my own, http://nyarly.net, which is not abandoned, but I didn’t have enough time to make it ready enough for showing off. It was going to be a cross between forum, wiki, project management and knowledge base system. It’s written in python (I like that language) on server side and js (with jquery) on the frontend (frontend should be as quick and responsive as possible, no reloading!). Now… Quantified Prestige, the document describing it is quite extensive, but my short question is if it’s similar, connected or otherwise relating to Attention Economy, please?

Nyarly.net might be a pretty good base CMS for Project Future, if it actually reaches maturity. Somehow it feels like we are all basically doing the same to create a meta-project platform for futurists. It would be good if we could pool our resources and efforts and create some kind of overarching synthesis. This will of course require a lot of discussion and coordination for which we can use the current forum and wiki.

Now, Quantified Prestige is less focused on attention, but more on reputation: On rewarding content creators, but not content consumers. Content creators would be rewarded by getting Prestige (which in turn could translate into a steady income in the coupled Fluido currency, or Bitcoins under some circumstances). Prestige could be used to guide decisions about how worthy of attention something might be. Users with more Prestige probably produce more interesting stuff than others.

Anyway, I think there are several different puzzle pieces which seem to emerge to define the future of economics together: Basic income, Quantified Prestige, AMP, perhaps energy accounting in some way, too. It’s not like one component would be the panacea for everything, but if we combine all these puzzle pieces we soon get a very futuristic and very effective economy that can reward everyone while still having embedded balancing systems. We are living in interesting times, indeed.

I’ve mentioned Attention Economy precisely because of Synereo - that project inspires on many levels and highlights the fact that these days the most important/valuable possesion we have is our time. It’s precious and not because it can be used for looking at advertisements, but because of what a person can do within it. And it’s time is the one thing that we can’t buy more of, regrettably. Therefore it makes sense to use units of time as currency… And yes, the idea of one platform for all is very common and pervasive - but it’s also a complicated one and requiring much more time (time, again) then we have. Even collectively, I suspect. The only hope is to attract enough users (members) to get something done…

I’ve done some work on this over the last week or so.

Stokosm is an explorer for goals, projects and requirements, and their relations. It is part of the larger vision of Jera - guillefix/jera-stokosm

Here’s what it looks in my local machine: 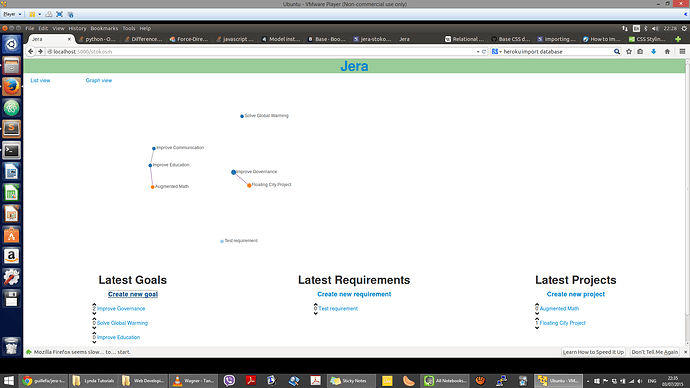 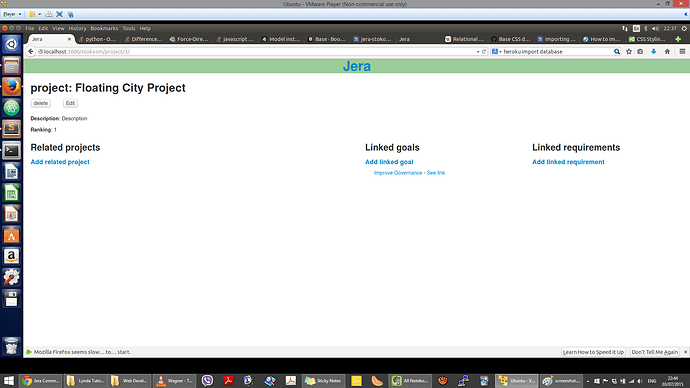 There’s a live version here: https://jera-stokosm.herokuapp.com/stokosm which however doesn’t work yet. I get an error from the database, which I’m not sure how to solve (and not present in my local copy), so I can’t add stuff.

Among things left to do: add users, add the filtering system (showing only nodes related to certain nodes), improve the graph to show hierarchical connections, and place different nodes on different regions, not just different coloring. This is without mentioning some further and more advanced ideas.

I am still learning (and I’ve already found quite amazing how much stuff there is to learn: html, css, javascript, django, d3.js, etc., but I’m loving it!) and will keep working, and of course if anyone wants to help there’s the code, and here’s the forum to discuss as well

Meanwhile I’m gonna switch for a bit to my other summer project: the Augmented Math platform, which will require learning a few new javascript libraries and things!

Sorry for replying so late. It’s cool that there’s this prototype available. Too bad the Heroku pesters you with a database error. It may be an issue with how Heroku works, but I don’t have any real experience with Heroku, so I don’t know how to fix the problem.

Perhaps the problem wouldn’t appear if you set up a database on a VPS on your own. Of course, that would come with some costs, but there are cloud servers that can be set up, backed up, and then deleted quickly afterwards. That way, you could test online versions of Jera-Stokosm for minimal cost. On Digital Ocean (this link contains my referral code with which you can save some money) you can set up a small VPS for 5$ per month. If you only run it for a few hours each, create an image, and destroy it, you can run it for almost nothing. Later on, you can create a new droplet and use the image to get back to where you have been last time.

Anyway, it’s nice that you have your code available at GitHub. Perhaps someone will pass by, fork the project, and use it for his own specific purposes. It would be quite interesting to see a version of Jera-Stokosm being used somewhere