Am developing a children’s book concept called the “The Bumpivores”. Summary below.

Goal
To encourage children to think about problem solving through the eyes of some imaginary creates called “The Bumpivores”.
Overview
Bumpivores are creatures that co-exist alongside other humans. They are called Bumpivores because their mental food source are called BUMPS. BUMPS represent the Big Unsolved Meaningful Problems worth Solving that grow our world. BUMPS can only be eaten by Bumpivores when they are solved. Bumpivores are problem eating creatures. 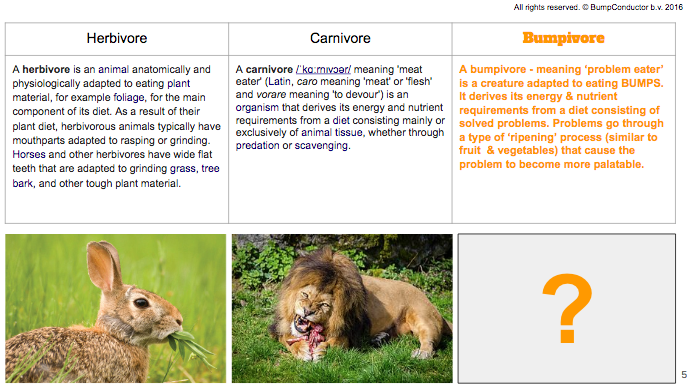 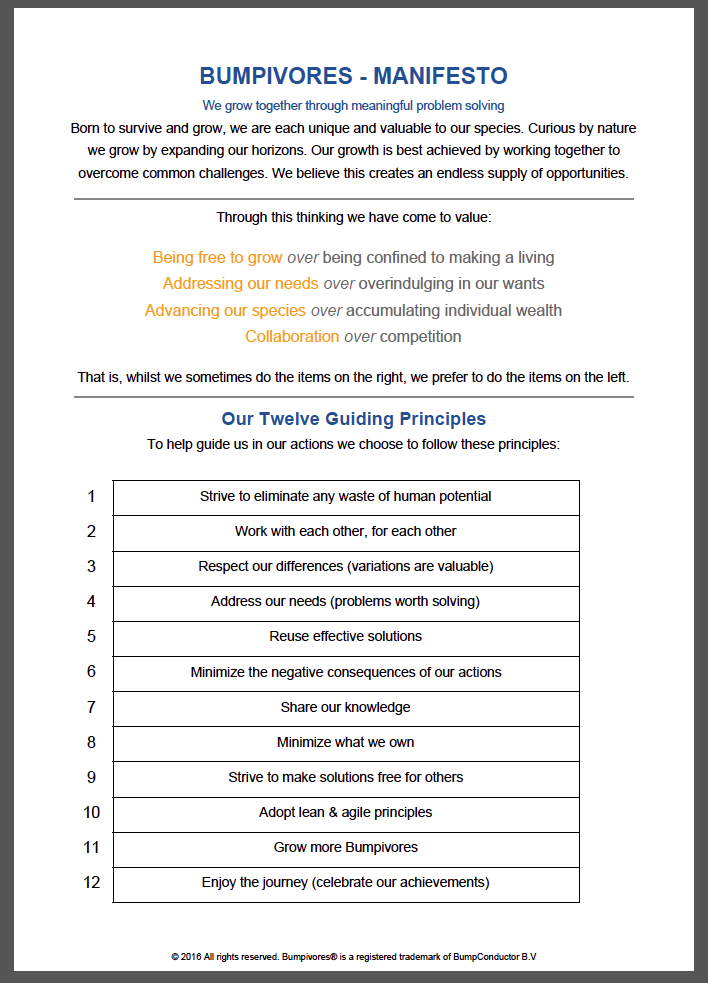 Any input much appreciated.

Many thanks in advance.

FYI. Following comments I received from elsewhere I have updated & replaced the Manifesto in the main post today.

Sorry for the late reply. I’ve taken notice of your manifesto, but haven’t felt well enough to reply appropriately up until now.

The overall concept seems to be very interesting. A general issue I see is that the idea of eating (solved) problems seems to be quite abstract. Can that be visualised in a useful way somehow?

I see what you want to express by stating “Addressing our needs over overindulging in our wants”, yet the distinction between needs and wants isn’t very clear cut. How can you differentiate between both? For that you’d first need clear definitions. While a want simply is something we want, I’d define a need as something that if it is met (or provided for) increases one’s vitality (sustainably). Strictly speaking, with that definition you only know whether something is a need by meeting it and observing the effects of that on your vitality. But yeah, with that definition what you say makes a lot of sense. The devil only lies in the details here.

6. Minimize the negative consequences of our actions

This can mean two things:

8. Minimize what we own

I get that minimalism can be great, but I wouldn’t pose it as a general principle that everyone should adhere to. After all, owning lots of useful stuff (tools, resources) can be quite beneficial, if you want to solve complex problems.

That’s quite a lot that’s compressed into a single point. Not everyone is familiar with lean & agile principles, so for user friendliness those principles (or at least the most important ones of them) would need to be unpacked. It can also be questioned whether lean & agile is the best approach for everything. After all, there are “competing” philosophies.

Are bumpivores like plants that can be grown? And how would that even work? Can ordinary people be turned into bumpivores?

Ok, so this is an interesting manifesto. But how is it related to the children’s book concept? The manifesto is certainly a bit too hard to read and understand for children. I guess the manifesto depicts how bumpivores lead their lives. For all stories that emerge from that the saying “show, don’t tell” applies. It should be apparent from their actions what kind of principles bumpivores adhere to.

Hi Michael,
Sorry to hear you continue to have the health issues. I also continue to struggle but like you I do my best to keep going

As always you have excellent comments

Have made some updates based on comments received from you and others. Latest version at www.bumpivores.com.
It remains ‘work in progress’.
Ken